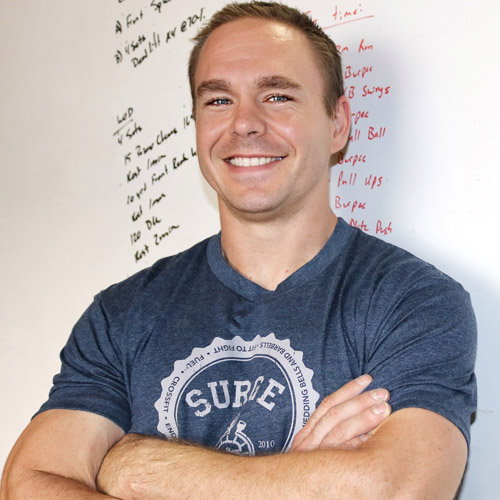 Much like Courtney I grew up playing sports and being active from a very young age. Through high school I played football, baseball and ran track. After high school I was fortunate enough to receive a football scholarship to Adams State College where I played and attended college for three years. I transferred and graduated college from Metropolitan State College of Denver, earning a bachelor of arts in Human Performance and Sport along with a minor in Nutrition. During my last semester at Metro I applied for an internship at the University of Colorado to work as a Strength and Conditioning Coach with their athletes. I was the first intern from Metro and the Human Performance and Sport department to be excepted to work at CU and with their athletes. At the conclusion of my internship I was offered a position as an Assistant Strength and Conditioning Coach, which allowed me to work with 100+ top level athletes on a daily basis. Following the University of Colorado, I began working at Velocity Sports Performance as a Performance Coach. Velocity was very sport specific driven, however, it gave me new insight to working with kids along with other populations that weren’t strictly athletes. My next stop was the Colorado Athletic Club at Inverness (CAC), an upscale tennis and Athletic Club where I attained the status of Master Trainer. While at CAC I implanted Olympic Lifts, Plyometrics, agility drills and other so called non traditional training methods with my clients. In addition I started a “Kids on the Move “ program for kids 8-12 yrs old. The highlight of working at CAC was being introduced to Functional Fitness, up to this point I had never even heard of Functional Fitness. This changed my life, I fully believe that Functional Fitness found me. It opened my eyes to what fitness truly was. I was using a lot of the movements and training tools which Functional Fitness is based on, but the methodology behind Functional Fitness was like nothing I had ever seen or learned before. I began to use and implement the Functional Fitness methodology into my own training and training programs for my clients. In addition to working at CAC I was working with several AAA youth hockey times throughout Denver as a Strength and Conditioning Coach. Most of the places we had to work in had little to no equipment. It was here where I began to utilize my creativity and knowledge as a Coach. I had to come up with workouts that would challenge these high level youth athletes, this is where I found my niche. After CAC I was hired by Mountainside Fitness/Core Concepts as an Assistant Director and Personal Trainer. I continued to use Functional Fitness as my main method of training, I continued to learn and grow as a coach. I avoided uses machines as much as possible, which allowed me to teach and coach my clients on proper movement and how to engage specific muscles to help fix whatever problems they were having. Machines took away from human movement, they were used by trainers who either lacked the creativity and knowledge to teach proper technique, or were just lazy. After a year and half of planning and a great deal of encouragement from others I decided to start 303 Performance LLC, and soon after followed Surge Elite Performance & Fitness. Surge Elite Performance & Fitness is a place for highly motivated, competitive, capable, dedicated and open minded individuals who strive to make themselves better everyday. Our members push themselves in workouts that are not just taxing physically but mentally as well. They compete in our group sessions, which is actually the true success of our program. The programs are universally scalable or modifiable which allows individuals of all fitness levels to join. I have personally witnessed classes full of people ranging from 16 years old, up to 66 years old. All the movements/exercises are functional and are engrained in you, anyone can benefit from our programming.