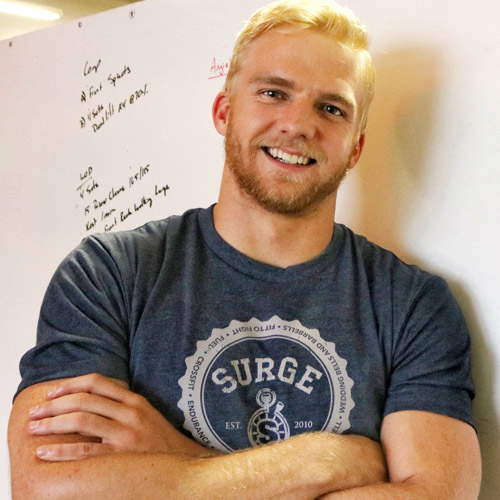 My journey into health and fitness really started when I was a kid. Throughout my whole childhood I was very active and played or participated in just about every activity available. However, I had never really trained or had a purpose with my activity until my freshman year of high school when I started training to be better at sports. I played football and was a state level swimmer. I continued to train in the weight room and in the pool consistently for my 4 years of high school.

Before my junior year of High School I tore my ACL during a 7-on 7 tournament which would cause me to miss that entire season. Unfortunately, I was never really the same after that, wasn’t able to perform the way I wanted, and my senior season was a disappointment to say the least. After I was finished playing football I realized I needed to be training with a purpose again, get out of the slump my first knee surgery put me in, get good at a sport again and needed an outlet for my high energy personality. So, one day while watching the Functional Fitness Games on ESPN and I saw these incredibly fit individuals doing competitive exercise. I was immediately intrigued and googled Functional Fitness Gyms and Surge Elite Performance & Fitness ended up being the closest one to me. I dropped in got in one of the best workouts ever and have kept with Functional Fitness here for the past 5 years.

October 2015 came around and after a conversation with Brandon and Courtney, I decided to get my Functional Fitness Level 1 certification and shortly after that became a coach at Surge Elite Performance & Fitness. I closely observed Brandon and Courtney coaching to learn as much as possible, as well as reading or watching whatever I could to further my knowledge about Functional Fitness and how to be a better coach.

Functional Fitness has many aspects and that is what makes it so amazing and fun but one part of it that particularly interested me was the Olympic Weightlifting. So, I spent most of the extra time I had training on getting under a barbell and getting as good at the lifts as I could. Reading literature and watching all the Hookgrip YouTube videos I could I tried to teach myself as much about the lifts as possible. Brandon and Courtney took notice of this and strongly encouraged me to start a Barbell Class at Surge.

Now, Functional Fitness and Weightlifting are my passion and I could not be happier. Since my first knee surgery I have had two more to revise the original however with Functional Fitness the recovery from those two was much easier and happier. I am no stronger than ever physically, emotionally, spiritually and mentally. I wish to continue my growth as a coach and an athlete. There is no better place to do it than at Surge Elite Performance & Fitness with Brandon and Courtney helping to guide me and all the support of our members.